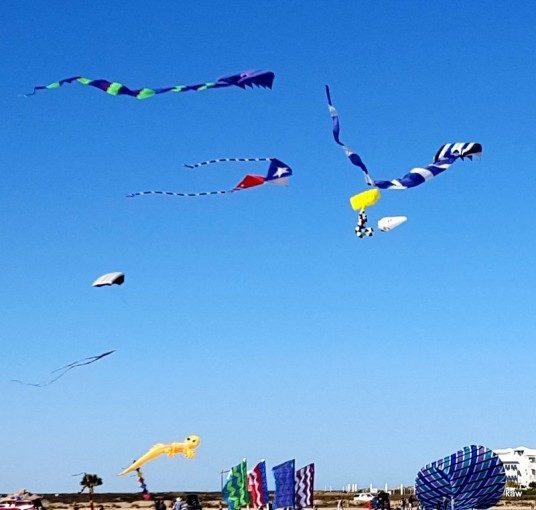 Saturday we took a “tip trip” —a trip to the very tip of Texas. Or at least about as close to it as we could reasonably get.

The approach to South Padre Island is not very exciting, as it looks just like every other over-developed seashore paradise. Lots of high-rise buildings, motels and condos I suspect.

Our excuse for going was a game watch at Louie’s Bar in South Padre Island. There were about three-dozen Iowa Staters there. Although the Cyclones didn’t play their finest game, they did play fine enough to beat Oklahoma State by five points. As a result, we could say that a good time was had by all.

We took the most direct route possible to get there, shown here:

We saw several fields which appeared to be planted. I suspect they might have been planted with the second crop of whatever they are growing. We also saw some onion fields where the plants were about a foot tall and cabbage fields with cabbage nearly ready for harvesting. 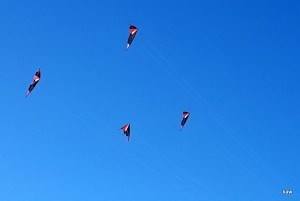 Our tip trip on that particular day had an additional benefit: it was “kite day” on the island! After the game, we drove to the kite area, which is just beyond the Convention Center. I watched three men and one lady fly four kites in formation! The announcer said that one of the visiting kite gurus said this was the larges crowd he’d ever seen at a kite festival.

Pat had the idea to buy a nice T-shirt. I told her I thought we might be able to find a T-shirt shop! We did; it wasn’t hard at all! She found one for herself and two which are now in the mail to a town in southern Minnesota!

For the return portion of the tip trip, we chose to take the highway nearest the border with Mexico. We took the southern-most highway, TX-281, from Brownsville to Progresso. At a couple of places, it’s less than 1/4 mile from the Rio Grande River. That’s the really squiggly black line on the map. Here’s our route home:

But we did see a section with a gate which was actually closed! I’ve heard that up here near McAllen, there are 13 gates, all of which has never been closed!You can see the closed gate at the right edge.

The wall is about 18′ high. The vertical members are steel rods, perhaps an inch or more in diameter. The posts are steel and about 6″ on a side. All are set in a concrete foundation. Occasionally, newcomers to the U.S. try to climb over “the wall,” usually with disastrous results.

It appeared that the wall might have been built in places where it could reduce the number of illegals crossing populated areas. Here, you see a house with “the wall” as their back fence! Talk about an expensive back fence!

That’s enough on our tip trip!

Before we return to Iowa by the end of March, we plan to continue exploring. We plan to drive to Laredo, which is about 130 miles NW of us. That area is much less populated than the area east of us, but I’m sure we’ll find something different and interesting.