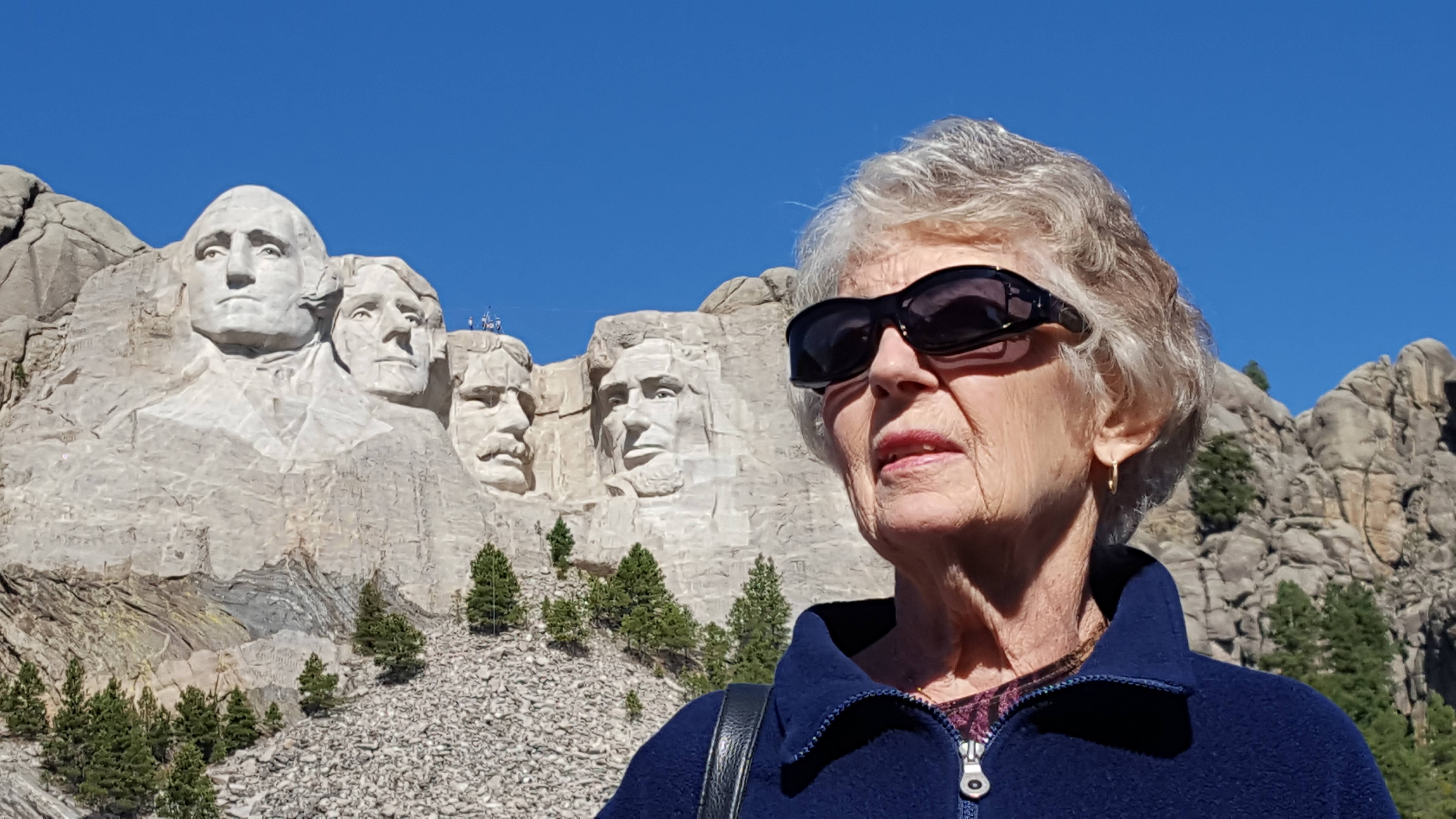 The picture above was taken during our September trip to the Black Hills and was featured in our Christmas letter. Some have suggested additional faces be added to the famous mountain so I thought I’d see what it might look like with a lady joining “the boys.”

Here’s what my friend of 50+ years, Gene in Waseca, had to say about it:

“Had your Mt. Rushmore candidate been available on Nov. 8 she’d have gotten my vote!
Millions must have held their noses in the privacy of the voting booth.”

Although very tempted to say something, I’ll make no further comment on the outcome of the election.

With the passing of Kenny Jones, Kenny Mensink became the oldest male resident of Lime Springs. We attended his 96th (?) birthday party a few months ago.

Townspeople witnessed the long-awaited opening of Lime Springs Beef —and a few short weeks later, it’s closing. That was a sad and unfortunate event for the area, to be sure.

The Lime Springs School building and grounds, no longer used as a school,  became the property of the City of Lime Springs. The City has since sold them. I have no information regarding future use of the buildings or property.

Several sons and daughters of our hometown, or family members of same, departed this life during 2016. Some which pop into mind are Margie Ihns, Corey Smith, Kenny Jones, Pauline Roll, Paul Lewison, Bill Hall, and Jim Ellison. I’m sure I missed some as these are just ones with whom I had some sort of connection.

Do you read Facebook? It’s a horrible waster of time, but is about the only way we keep track of the grandkids. It also gives info on some Lime Springers! Example: Recently, Laney Stevenson announced her engagement to marry Bobby Fazer on Facebook!

As usual, our year was relatively calm. No significant medical issues arose, for which we are very thankful.

We got to visit “the kids” in Owatonna several times. It’s good to see them grow physically and mentally! They spent a couple of nights with us in the trailer during Sweet Corn Days.

Our “big trip” of the year was a few days in Custer, SD, in September. We love it out there!

We visited Jim and classmate Sheryll Smith several times the past year. She’s the only classmate in LS! In October, we met classmate Gary and Sarah Thomas in Marquette for lunch across the river in Prairie du Chien. A few days later, we lunched with classmate Sheryl and Lee Sloan in Ames —at Hickory Park, no less! (My favorite Iowa BBQ place)

From Ames, we drove to Des Moines for a long-overdue visit with my cousin, Claire Williams and wife Louanne. We met at their son Trent’s home. We hadn’t seen him since he roomed at out place while practice teaching in Marion and Hiawatha as a Luther student. That must have been about 15 years ago! Since graduating, he’s taught in Dubai, Singapore, and Stavanger (Norway), and now is teaching in Des Moines and attending classes at Drake.

We’ve also seen cousin and classmate AnnaLee Austin. We’ve visited with four of the 12 classmates the past year! Have you noticed that friends of years ago are more important these days than they were 30 years ago? It seems to me that they definitely are!

Pat continued her painting with watercolors two days most weeks. I continued giving flight instruction, accumulating 80 flight hours in 2016. That’s not a lot, but is a lot for me!

We began and ended the year in Mission, TX, at Hidden Valley Ranch for the fifth year. This follows seven winters in Rockport, TX, so guess we are truly Winter Texans.

This year, our trip from Cedar Rapids to Mission was more leisurely. We left on Monday, arrived on Friday, and avoided I-35 totally! We had several “short days” and visited friends near Tyler, TX, for one afternoon and evening. This trip we spent two nights in Walmart parking lots, one in a Corps of Engineering campground, and one on a friend-of-our-friends lot. It was a relaxing trip. We might adopt it as our preferred traveling method!