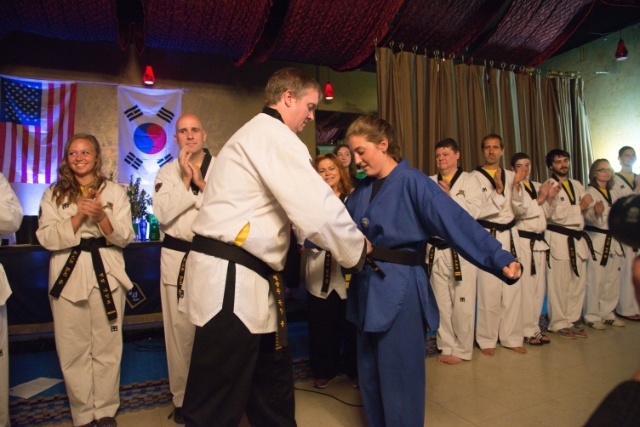 Usually on my weekends, I know what to expect. I’ll have a marching band competition, church Sunday morning, homework Sunday afternoon, and reading and Netflix whenever I can in between. Last weekend, however, something out of the ordinary happened. I knew it was coming, but when it finally arrived, it seemed to hit me like a pile of bricks. Last weekend, I received my black belt.

This is something I’ve been working toward for five years, and it was a huge moment for me. In fact, it was such a huge moment that it was almost overwhelming. When we received our Black Belts, we got to turn to the crowd and deliver a speech. It didn’t have to be long, or any specific content. In fact, there wasn’t much criteria for the speech in itself. We were only required to give one, and it was suggested that we thank people in this speech.

As I started to give my speech, the entirety of the situation hit me. I realized what that moment fully entailed, and it choked me up. I felt so amazed, so overwhelmed, that it was hard to get out in words really how I was feeling. Every time I tried to start talking, I got teared up and had to choke through it. And while I was struggling to deliver my speech, there was one point that I felt I didn’t get to fully express.

At our yellow belt test, which is the first test we ever attend, Master Kurtz ties our belts around our waists. I can remember five years ago, when he did this, Sa Buem Nim explained that they only do this when students receive their yellow belts, and again when they earn their black belts. I also remember very clearly thinking, I want to get there. I want to have my black belt tied around my waist. And finally, I did.

Tae Kwon Do has been such a huge part of my life that reaching this huge milestone was extremely important to me. It was an incredible feeling to know that every struggle, every triumph, every little battle won has led me here, and finally, I reached my goal. In that moment, when Master Kurtz tied my belt around my waist, I felt this connection with the little third grader me from five years ago, and I realized how far I’d come.

There is nothing like the feeling of reaching a goal long sought after. Whether it’s a promotion at work, an A+ in a difficult subject at school, or a black belt in Tae Kwon Do, these goals are hard to reach, but mean that much more when we do reach them. Find these goals that might not be so easily accomplished, and push yourself to reach them. And if you are looking to try something new, I would suggest looking into Tae Kwon Do. It has changed my life in so many ways, and it still continues to shape me into the person I want to be.

Reaching goals is important. When we set out to do something, it’s easy to decide to quit because it’s hard, or it’s taking a while to accomplish. If you are working toward some long term goal, I would recommend that you keep moving forward with it. Don’t give up. Don’t forget where you want to go. And someday, it will be worth it. See you next week!