The Way of the Goose 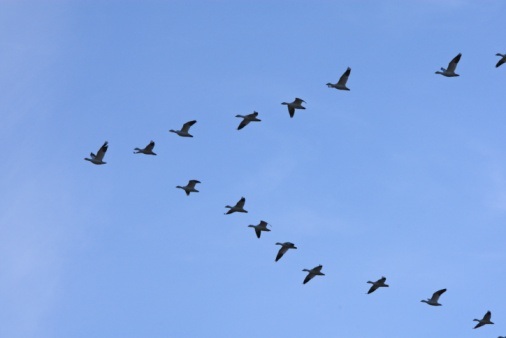 Why is it that one side of the V formation geese always fly in is longer than the other? Answer: because there’s more geese on that side. My dad told me this joke a long time ago, and it’s stuck in my head ever since. However, geese are good for more than the aim for a shotgun or the butt of a good joke. Surprisingly, geese can be exceptional role models as well.

According to interestingfunfacts.com, geese have a strong aptitude for leadership and teamwork. The whole point of the V formation that geese fly in to migrate to warmer locations is to lessen the strain of the journey for the majority of the geese. The lead goose breaks up most of the wind resistance, making it easier for the rest of the geese behind him to fly. When the lead goose becomes tired, he flies to the end of the V, where it’s easiest to fly, and another goose takes his place. The geese behind the lead goose even honk to encourage those in front of them to keep up the pace.

When working as a team, it’s important to spread out the role of leadership. One person can’t take on all of the responsibilities, and the group functions more efficiently when some of the work is distributed to other members. The geese also demonstrate how important it is for everyone to take their turn at the difficult work, rotating out so that everyone works but isn’t overwhelmed. They even show how important it is to communicate and encourage one another in a group.

Geese are also extremely loyal to other geese. When geese mate, they stay together for a long part of their life. If one goose passes on, their mate will stay single for years, often not finding another mate. Geese mates raise goslings together, which increases the goslings chances of survival compared with other kinds of birds. And, if a mate is threatened, geese will protect each other, standing in the way of danger to defend their mates.

One fact that I’ve heard about geese before, but still found adorable and illuminating, is that if one goose becomes sick or injured while on the migration journey, two other geese will land with the ailing goose. These two geese will protect the injured goose from predators and bring it food, staying by its side until it either recovers enough to continue the journey, or dies.

Humans are creatures of logic. I think often we focus too much on the cold reasoning of a situation, and forget to be empathetic. If we were put in the position of the geese, as odd as it sounds, I think many humans would be tempted to leave the other goose behind, or at least hope that someone else would stay behind. We would worry about making it to our destination on time, and not being late to wherever we’re going. I know that there are so many wonderful people out there who wouldn’t hesitate to act as a goose would, with compassion and empathy, but I think it would also be easy for many of us to turn a blind eye.

In addition, acting like a goose doesn’t have to mean that we make a huge sacrifice or go way out of our way. It can be something as simple as holding the door for someone, or helping a stranger pick up something they fumbled. Helping someone carry groceries, paying it forward at drive thrus, or simply offering a smile to someone across the street.

We can learn a lot from geese about how we should treat others. Geese take turns with the hard jobs so that one goose doesn’t have to bear the burden alone. They are extremely loyal to one another. And they never leave a man, or goose, behind. These are simple lessons that can resonate deeply in all of our lives. This week, look up to the sky, offer a kind gesture, and remember the way of the goose. See you next week!