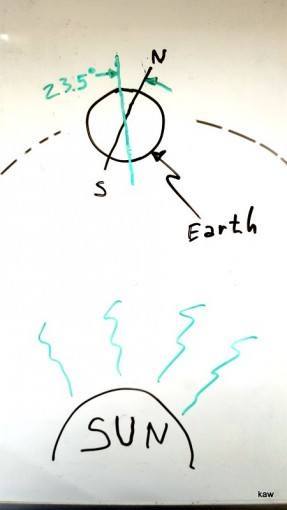 We all know that the days have been getting longer since December 21, right? Yes, that’s true.

Interestingly (to me at least) the sun continued to rise later each day until just a few days ago. In McAllen, RX, it started coming up earlier about Jan. 13, and then only a few seconds earlier each day.

Until just a few days ago, then, all of the gain in daylight has come from the sun setting later each day, rather than from the sun coming up earlier each day.

What causes this strangeness in how our planet works? It’s because the axis of the Earth —that imaginary pole which runs through Earth and becomes the North Pole and South Pole on either end— is not straight up and down. It’s tilted 23.5º.

I didn’t realize it, but according to this article that tilt is necessary to keep our planet from having extreme temperatures, extremes which would make life as we know it impossible. Now you know the importance of tilt in our lives!

There, I’ve learned something today and it’s only 9:25!

But the big question is, did you learn anything or find anything on The Lime Springs Page interesting?

How about letting me know!
Just click here to send me an email with your thoughts: kaw@syntheticsaves.com