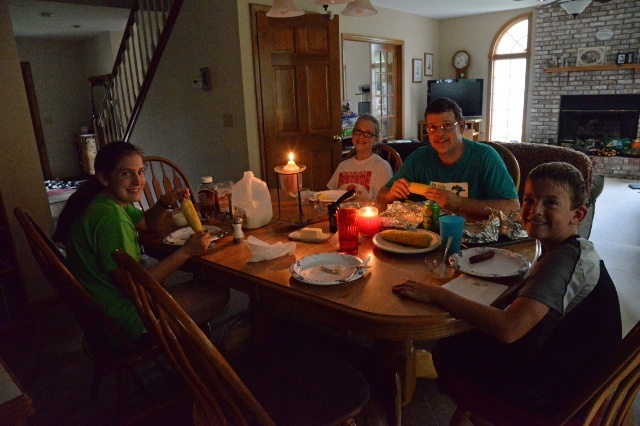 Recently, the power went out for my street. I’m not entirely clear on what went wrong to cause this, but the result was still the same. From about 4:30 to 10:30, we were without electricity. At first, this seemed like the worst thing ever. But looking back, I don’t think it was.

When the power first went out, I wasn’t that worried. My family was already outside shucking corn, and I figured we’d be doing that for another hour or two. I thought that by the time we were done, the power would be back on. After all, most of the time, that’s what happens. Every once in a while, we lose power, but it always comes on after ten minutes or so. But that didn’t happen this time.

As we were shucking corn, some of our neighbors came out, asking if our power was out like theirs was. After talking to a few people, it was clear that the entire street was out of power. Again, I wasn’t really concerned. I thought that the power would be up again in a few minutes, and I could go inside and watch TV, or go on YouTube, or play some games on the computer.

However, when we finished shucking the corn, the power was still down. I was pretty irritated, because there was an episode of a TV show, that I really wanted to finish. Still, I couldn’t do anything to fix it, so I just tried to make the best of it.

My neighbor came over, and us kids decided to play a few rounds of our version of “Hunger Games”, complete with flimsy swords, slingshots with foam ammo, shields, and an old pair of binoculars. It wasn’t the most elaborate setup, but it worked for us. We played a few rounds of this game and others, and by the time we were done, it was time to go inside and eat.

My parents set up some candles in the middle of our table, and we set up paper plates, while my dad got the hot dogs off of the grill. Just as we were digging in, however, the power flickered back on. Surprisingly, my initial reaction wasn’t relief.

Of course, I was happy that we could open the fridge and flush the toilets again, but I had been excited to eat by candle light. I had been looking forward to going to bed in the dark, and reading by flashlight. Naturally, as I was thinking that it would be nice to have the power out again, the lights flickered off. And they stayed off for another four hours.

I really enjoyed the next few hours before bed. We went back outside, and talked with our neighbors while the sun went down. I brought out a book and read in the dwindling light, and once it got too dark, I picked up a flashlight and kept reading. We ended up breaking out the sparklers that we usually reserve for fourth of July, and the kids played with those while the adults talked.

When I finally went to bed, it was too hot to sleep in my room. I slept instead on the couch that’s near my room. As I fell asleep, I was glad that the power had gone out. I had enjoyed being outside, even if I did end up with an absurd amount of bug bites. It was nice to turn off technology for a little while, and connect with friends and family the old fashioned way. Sometimes there are things that we don’t have control of in life. These things can often be unpleasant, and if you let them, can ruin your day. Instead of letting it ruin your day, remember that when life gives you lemons, make lemonade. See you next week!