Editors Note:
This hog hunting article was written by Tim Hoopman, River Falls, Wisconsin. Tim and Carole spend their winters in Rockport, TX, about a ten-minute walk from the Rockport park at which we stayed for seven years. Tim is one of my “Austin cousins” and spent his early life in Cherry Grove.

This article on hog hunting began as a series of three email messages. I thought they were too good to not recieve a wider distribution so I’ve repackaged them as an article, with Tim’s permission.

I hope you enjoy the story!

Note: If you’d like to see the exquisite detail in some of the pictures, just click on the picture! The picture will enlarge to approxiamately 4 x 6 inches. Then click on the back arrow to return to the article.

The hog hunting trip was much more interesting than I had expected. Although I did not get a hog, the trip justifies a series of e-mails to describe the experience. 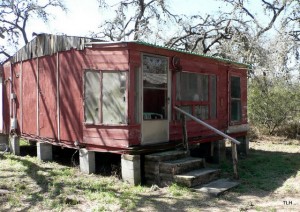 The cabin was a collage of color resulting from the unique, artistic blending of various Texas construction materials.

The interior was tastefully decorated and had a suspended ceiling with a beautiful chandelier centered in great room. 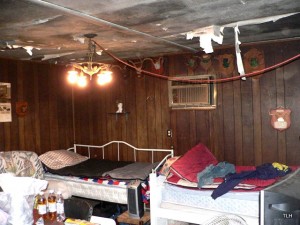 The Ceiling: A Sight to Behold!

The floor was tastefully decorated with rodent dropping and air wafted with the heavy scent of rat pee. Leaving the doors open for an hour diluted it.

In many states if this was a prison cell it would have been considered cruel and unusual punishment.

Next e-mail the: the hunting stand. 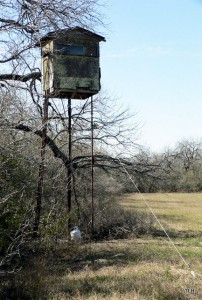 The hunting stand was the tallest in the area giving you sense of superiority over any other hunters. The structural support was a unique mono pole design with multiple cables gently curving to the ground for stability. With the 25 mph winds that day the hunter had the luxury of swaying gently back and forth about six inches. If you don’t get sea sick it would have been great for a nap, had there been room to lay down. The castered office chair with the foam rubber seat would roll back and forth with the swaying, very relaxing. I practiced aiming at things near the bait station so I would be ready for the hogs. It was similar to shooting while standing up in a canoe. 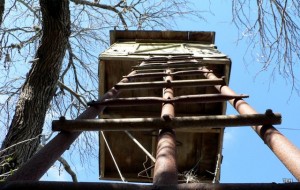 The stairway to heaven (the ladder) was vertical, with steps constructed out of various pieces of scrap iron. Each one unique with different levels of rust and degradation.

The three vertical members of the ladder were fastened to the house with one bolt, one spike and one sheet rock screw. I took up a drill and replaced the sheet rock screw with another bolt. It must have been a really sharp bit because it went through the pipe like there was nothing there.

Not All Steps Were Trustworthy

Some of the steps were rustier than others.

The security system was a spoon, pure silver I’m sure. In the hasp to the right of the door knob. 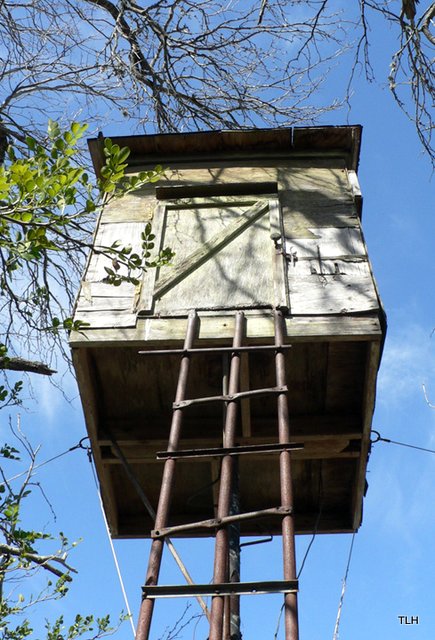 Where you can swing and sway and watch for hogs 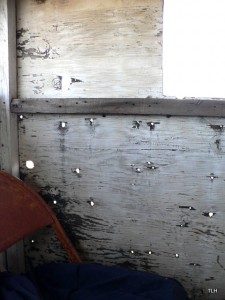 Bullet holes!
Do the hogs shoot back?

Ventilation was enhanced by a multitude of artfully arranged bullet holes in the wall. I did not see any blood stains on the floor.

Next e-mail, The Spectacular View!!

In the last e-mail I called the ladder “the stairway to heaven” because the high probability of dying from the ladder separating from the house or the whole damn thing blowing over. But I digress.

The door to the stand is only about 3 feet tall so when you make the trip up the ladder ready to hunt there are some difficulties. Your pockets are full of beverages, snacks, ammunition, binoculars hanging on your neck and a winchester 270 on a sling on your back with the barrel sticking up above your head. You gingerly climb the ladder until you can stretch and reach the silver spoon with your right hand while hanging on tightly to the ladder with your left. You pull out the spoon and quickly duck so the wind blowing the door open doesn’t knock you off the ladder or make you drop the spoon as the door swings over your head. There are no handles inside so you go up a couple of steps, grab the sides of the door frame, bend at the waist so the gun makes it in the door and lay on the floor, sliding forward bring your legs in. I could not stand straight up inside. 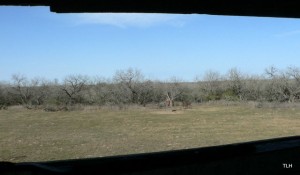 The wide, foot high window opens out giving you a panoramic view of the country side, scrub brush, cactus, dry weeds and junk. The bait station is about 70 yards out. It has a 55 gal barrel full of shelled corn. It sprays out corn once in the morning and once in the evening.

When it sprays out the corn a flock of giant turkeys runs out and eats the corn. 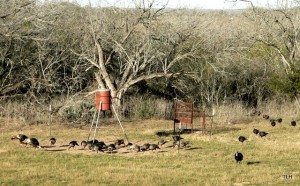 They were the biggest, most beautiful turkeys I have ever seen. Must be Texas turkeys. 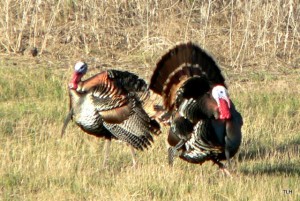 “Ain’t I handsome?” said the male.

The turkeys were the highlight of the adventure.

I have already gotten an e-mail inquiring how much such an extravagant hunting trip cost. I paid the way “Tim the tool man” always pays. I had to fix the hot water heater (yes, we had hot water), fix his chain saw and cut and split a load of oak and mesquite fire wood.

Can’t wait til next year!!

If you really do want to know more about wild hogs in Texas and hog hunting, here’s an article from the Smithsonian Magazine which will help you understand why hog hunting is desireable.