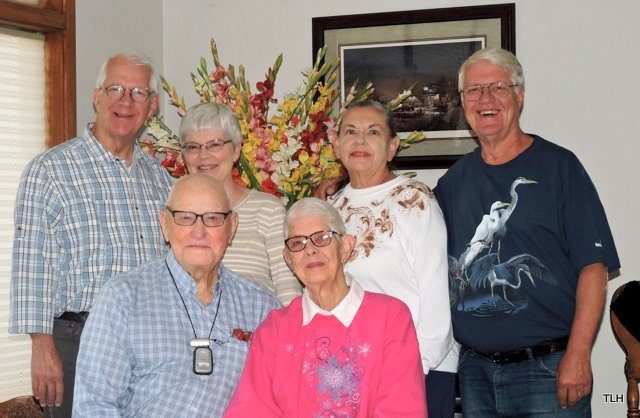 Recently my cousins, the “kids” of Goldie (Austin) and Orrin Hoopman got together for a BBQ meal and this picture. I thought this was a great picture of the Hoopman siblings so sent it out to my mailing list of Austin Cousins, which numbers 12 first cousins and 21 first-cousins-once-removed. Lots of replies came back from the group!

Who’s in the picture:

Missing is Delbert Hoopman, who lost his life a few decades ago in the crash of a Pietenpol airplane, and his widow, Ida, who continues to live in the Seattle area.

Orrin and his bride lived in Lime Springs shortly after they were married. He was a blacksmith in Cherry Grove, then moved to Austin and was a welder at Hormel for years. A very good welder, I might add! He also introduced me to the EAA (Experimental Aircraft Association) by taking me to “Oshkosh” (the big air show held there each year). I’ve never recovered, as there is no known cure.

Lots of comments were received along the lines of, “Wow, what a great picture!” I agree!

Kathy commented, “And I think there must be something wrong with Tim’s camera since we all seem to show either gray hair or pink scalps.  When I look in the mirror I see blonde hair!  Nothing like 50 years to add a few wrinkles to the mix.” A few others supported that theme!

The crown jewel of comments came from Julie Teslow, oldest child of Bernie and John. Julie said, “Added perspective. John and Bernie’s oldest child has been on Social Security for three years and is now on Medicare.”

Thanks for getting us thinking straight, Julie! I never would have looked at it that way, nor imagined that people I’ve known since their birth area also getting older. I guess we all need to be aware that time marches on and that we should make the most of it.